Where was catchin' up post #2, you ask?  Well, that's the Sale-A-Bration post from earlier.  Yup, playin' catch up in Stampin' stuff, too...

So, last year, I participated in 2 craft it forward events, one on Facebook and one through the Hive.  I'm planning to do another in a month or so, because quite frankly I really like sending random crafty goodies to folk....

What's "Craft it Forward," you ask?  Well, essentially, it's the Pay it Forward philosophy, but with crafts!

Anyway, I would post pics of what I made, but I foolishly didn't take any pics. Wait, I take that back.  I had pics of the first batch, but they were lost in the Great Mac Crash of 0-10... And the second batch?  Yeah, just never got around to it...

For the Facebook CIF goodies, I made little plaques with a page from Shakespeare and the birdie ornaments I've been making lately.  They were very cute, and I hope the recipients liked them. For my Hive CIF goodies, I made non-christmasy Christmas ornaments (they were shaped like trees, but the papers and embellishments I used were not christmasy.  kinda fun!)  There was lots of  Mod Podge involved, and I had a blast.  Plan to make more soon.  I also made a little bracelet for each of my giftees... Just a basic elastic beaded bracelet, but cute!

But here's the real purpose of this post--CIF goodies I received!! I like giving things, but I really like getting things... :D

Jessie, of Points for Creativity, made the most adorable little clay mushroom.  He's just too cute!!!! I also watched her make some other clay pieces, and it's a blast to see.  She's got a great eye, and, unlike me, is not afraid of the clay! 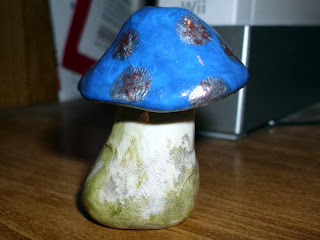 And Faye, from Twisted Imaginings, made the most gorgeous little ring! It's so comfortable to wear, too!  You can find more great pieces in her shop. (by the by, her prices are BEYOND reasonable; in fact, I think she might even be charging too little!) 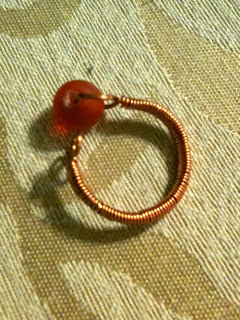 So there you have it!  Craft it Forward is a lot of fun, and I'll let you know when I do another batch!

Email ThisBlogThis!Share to TwitterShare to FacebookShare to Pinterest
Labels: Craft it Forward, creating the hive, Points for Creativity, Twisted Imaginings

This is my first Sale-A-Bration as a demonstrator, and I am just SOOOOOOOOO excited to tell you all about the great deals and gorgeous products!!!

From January 25th, 2011 until March 31st, 2011, here are the awesome deals you can take part in:
And now, the stuffs!!!!! We've got some great new products to share, including
You can take a look at all the great products in the Sale-A-Bration Mini Catalog, and you can check out our other great catalogs here.

Posted by RanaLea at 3:23 PM No comments:

So, I was largely disconnected for the last month, and that was tough.  I missed blogging, and I really, really missed my Mac... really.... missed it... lots... But, a very, very nice gent I know managed to fix lil' Miss Penelope, so I have her back, and she is working.  Mostly.  No iPhoto, oddly enough. But I can deal!

So, as the title suggests, this is the first of my "catching up" blog posts...  Cuz, I need to do some major catching up! I am going to try to post some pics here, but they were all taken with my phone and emailed to myself, so there's no editing on any of them.. So apologies if things get a bit clugy...

Alright, what's been going on with me.... Well, Miss Penelope here decided to take a header the week after Christmas, when I was in North Carolina with my parents, and without Internet access.  And of course before that was Christmas, so really, I've been out of touch since mid-December.  Christmas was pretty good.  Spent the day driving to NC, right into snow, which I haven't seen since I was a small tiny tot of a thing! I have lots of pictures of the snow, and the cabin in the snow, and the dog in the snow, etc, but those can come later.  Suffice it say, just now, that my trip rocked, and I had a blast.  But, I was glad to get home.

Of course, home presented other problems, like trying to get ready for classes without a computer.  But I have a wonderfully wonderful awesome friend, and she loaned me her Netbook.  So, that at least allowed me to get ready for school. It's funny, now that I have Penelope back, her screen looks 5 times bigger than it did before... I think because I got used to the tininess of the Netbook screen.

Other nifty things--I'm teaching my first ever British Literature class, and today -- well, yesterday at this point... -- I think I kicked literary butt... Or at least historical-literary butt... suffice it to say we talked about the middle ages and I had a blast.  Actually planning a blog post over on my Read-Write-Blog site about the research fun I had...

Oh--and I won 2nd place for Most Wearable Piece in Art With Heart Cycle 3 for my Falling Leaves Earrings, Necklace, and Bracelet set!!!! 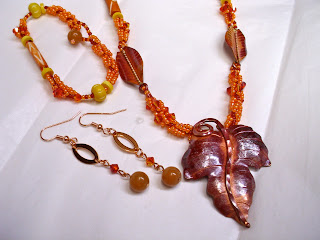 Alright--enough news for now.  I have more posts planned, touching on specific crafty-type stuffs and whatnot, so stay tuned!

Posted by RanaLea at 2:50 AM No comments:

Wowzers! How cool is this?

So, I've always been a writer.  I've written in journals my entire life... sometimes hard-bound books, sometimes a word file, and sometimes just bits of notebook paper here and there.  At the same time, I've always envied people who could be artistic in their journals.  I always thought it was just beyond me.

That is, until this past week.  See, this week, I started the Brave Girls Club Soul Restoration online course.  I joined Brave Girls Club back in August or September, and really enjoyed reading the blog posts and whatnot, then I found out about Brave Girls Camp, and was lusting to go (can't afford it anytime soon.  But I hope one day...)  Anyhoo, they decided to do an online course for gals like me, who can't afford to attend the Camp.

Okay, back to my main point... So, Melody, one of the founders of Brave Girls Club and a rather brilliant artist, posted pics of one of her journals in a blog she did ages ago (I can't seem to find it...), and I remember looking at those pics and once again thinking, "man, I wish I was that talented..." Cuz, see, I'm crafty, and I can make cards, and could probably scrapbook if I really wanted to, and I have a craft stash that is just terrifyingly out of control... But I'm not "artsy"... or at least, I didn't think I was... But this past week, looking at videos that Melody posted int he class for us, and making a determined effort to go outside my comfort zone, I've actually managed to create one of those journals that I've always been so envious of.  It' still not totally where 'd like it to be, talent-wise, but I'm likin' it.... I'm not going to post pics of this one, because quite frankly it is a bit personal, but as I start work on a more general art journal, I will post pics and share the ideas that I have.

Although, there is one tip I want to share now, and yes, I got this from Melody--credit cards rock.  And not for spending money and jacking up your credit, either... they make a PHENOMENAL paint spreader! You want lots of color on your page but you don't want to saturate the page with paint and wait hours for it to dry?  Squeeze some paint on the page, grab your credit card or equivalent thingy (I'm actually using old student IDs from my college days) and spread away! Works great!!!!! And then you just need to find a decent pen to write on it with.  On my black pages, I used a Sharpie silver paint pen.  On the rest of them, just a Pilot Precise.  Seems to work fairly well!  Although, I am going to go invest in a few good waterproof journaling pens.  Need to get to Michaels anyway.  About to run out of Mod Podge!  Horrors!!!!

What's in a name?

Honestly, I have no idea... Although I have heard that a "rose would smell as sweet." :) But see, I'm pondering a new name for my stuffs... the blog, the shop, etc...  And a while back, I was discussing a totally different thing with a friend of mine, and I half-jokingly described myself as "occasion girl"... So of course, now I have the image of a super-hero type character with a big embellished "O" on her chest holding a wreath in one hand and a greeting card in the other... or something like that... If only I could draw...

Now, because I'm just starting out, this would be the time to make a change like this. After all, I don't have a lot of money or anything invested in "Definitive Designs."  And I kinda like the idea of being "Occasion Girl." LOL! After all, I do love my occasions!

So what do you think?

Posted by RanaLea at 6:20 PM No comments:

So, Joni, over on the Hive, wrote a post about 12 random things; things we wouldn't necessarily know about her. And then, she invited us to do the same.  So here goes:
So there ya have it!  Some random stuff about me!

Posted by RanaLea at 2:02 PM No comments: